When the COVID-19 pandemic began, G. Staci Conley was no longer allowed to perform a job she loved.  Two years later, she is still searching for work.

A 60-year-old resident of Ft. Washington, Md., Conley had been working as an activity coordinator at several assisted-living facilities in March 2020. The dangers of the newly emerging virus meant gathering in common areas was no longer an option. That was particularly true for vulnerable older residents like those at the facilities where Conley worked. 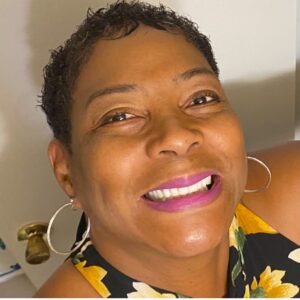 That meant Conley was no longer able to carry out her role bringing residents together. She applied for unemployment benefits, which provided some financial support until the emergency benefits ran out in September.

Now, two years after being forced from her job, Conley has exhausted her savings. To get by, she has relied on assistance from food pantries and a network of friends.

For Conley , the food insecurity she encountered after she was no longer able to go to work was new. She describes herself as someone who has always been able to make meals out of whatever she had.

Now a member of CAFB’s Client Leadership Council, Conley is searching for a new job. But so far, she’s been unable to find an opportunity that doesn’t require a lengthy, expensive commute.

“Even though that had been my passion, currently, you know, I’m just seeking a job,” she says of her previous work with seniors. “Whatever avenue [my job search] asks me to go into, I’m just going to do the best that I can. We can’t pick and choose any more like we used to.”

Newly food insecure due to the pandemic

As the food bank’s most recent Hunger Report has highlighted, the economic recovery from the pandemic’s effects has been vastly different when broken down based on race, gender, wage level and other factors.

Even as the unemployment rate has dropped overall, those changes have been vastly different across racial groups. For Black women like Conley, a declining unemployment rate suddenly increased again in December, rising from 4.9% in November to 6.2%, according to data from the Brookings Institution.

While she drew unemployment benefits, she didn’t qualify for support through the Supplemental Nutrition Assistance Program, or SNAP. Without those assistance programs available to her, Conley says she was grateful for the food assistance she received through the Capital Area Food Bank and its partner organizations.

“Anyone can get in those lines and get nutritious meals,” she says.

Helping others as she searches for work

While Conley was no longer able to keep going to work at the assisted-living facilities, she still spent the last two years caring for others.

Her daughter is grown and no longer living at home. But she has godchildren who she has helped care for as their parents were juggling working and virtual school.

“They never missed a meal,” she says. “I just did whatever I had to do to assist.”

She also stayed in touch with residents at the assisted-living centers where she used to work even after she stopped receiving a paycheck. Conley would call them on a weekly basis, offering crucial interaction to those most at risk of isolation and depression.

Conley is searching for a new job. But some openings require a lengthy commute that would significantly diminish her earnings given the recent spike in gas prices.

“I’m just going to burn my money up in gas,” she says.

Amid her challenges, she remains optimistic, saying she refuses to “sit down and fold.”

“I’m gonna keep pressing and pressing, and hopefully, things will come to a head when it comes to getting back on track,” she says.