Shonnie Jones’s passion is helping people. She believes that empowering families through food access and security is central to improving the lives of families in her community and furthering equity in the D.C. area. As a member of our Client Leadership Council, Shonnie hopes to become a more effective advocate for her family and community. 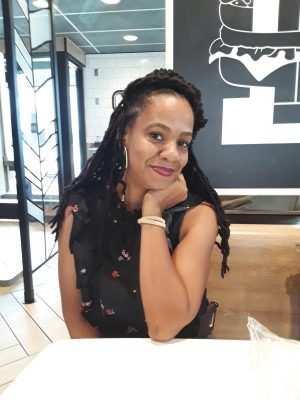 Shonnie’s journey as an advocate for food access and security is personal. While experiencing some health issues, Shonnie decided to change her lifestyle and become a vegetarian. After incorporating this change into her life, she noticed that most food resource centers such as food pantries and other food distribution sites offering free and hot meals in her area did not offer any dietary accommodations. This realization jump started Shonnie’s advocacy, and she made it her mission to gain as much knowledge as possible about eating and accessing healthy food.

Her experience as mom to her son with autism who requires special dietary needs, such as gluten-free and casein-free foods, further fueled her passion for access to healthy food.

Shonnie says when she lived in Southeast D.C, “it was and still is a food desert,” and that “the food choices were so unhealthy and scarce that it forced me to travel to Maryland to grocery shop.”

She notes that grocery stores in less affluent neighborhoods rarely have a wide variety of food to fit the needs of her son’s diet.

She points to areas around her home city of DC as a prime example where food access is limited.

“There’s been a food desert in Ward 7 and 8 for as long as I can remember,” she says. “I lived in Ward 8 about 12 years ago, and there was one grocery store.”

“I live in Ward 1 now, and in a five or six block radius, I can probably pass four grocery stores,” she continues.

As someone who grew up in the District, she says, she’s seen the city change over the decades.

“This is a great city,” she says. But, she continues, “there’s a huge wealth gap. There’s a huge knowledge gap.”

“Sometimes you have to get people to look outside of the box to understand that opportunity is available,” she adds. “What’s going on today doesn’t have to go on tomorrow.”

Through her work with the CLC, Shonnie is honing her advocacy skills to push for initiatives that promote greater entrepreneurship in areas with fewer grocery stores by encouraging the government to create programs that empower people to open their own stores. She believes such a strategy would both create employment opportunities for residents in need of work, and also create access to fresher, more nutritious food. Shonnie also advocates for increasing SNAP benefits (formerly know as food stamps) as an important way to expand consistent access to good food for those who need it.

Shonnie is especially focused on connecting with legislators by speaking to her own experiences. “Writing a letter is great,” she says. “But sometimes you get three minutes to give testimony, and you want to make those three minutes count.”

She says she wants to leave a “legacy of positivity” for her two children, and that is why she is such a passionate advocate.

Shonnie hopes to instill her passion of helping others in her two children because, “Along the way, by helping people, you encourage them to help themselves,” she says. “I can help you get to where you need to be, then you pay it forward and help someone else.”